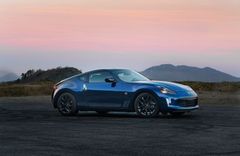 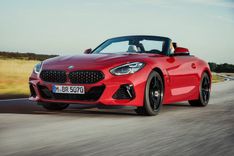 Most people follow a simple process in life – go to school, get a job, get married, buy a house and a car. Each step comes with its own variables, and one of the most popular variables in the ‘get a car’ step, which commonly pops up around the ages of 25 and 50, is whether or not a sports car is a good idea.

The answer is always ‘yes’. Very few things can distract a person from the allure of a low-slung two-door coupe with a good amount of power and an engaging drive. The only set back is that these sports cars usually come with a price tag that also manages to get your heart racing. We did some research to find 5 sports cars available right now with price tags under R800,000.

Ah, the Mustang. One of the top contenders for ‘midlife crisis’ car of the year. We can’t complain though because it offers quite an iconic car for very little money. The 2.3-litre EcoBoost engine isn’t as dramatic as its 5.0-litre sibling but still produces a generous 213kW of power and 441Nm of torque, propelling the American Pony all the way up to its top speed of 233km/h.

Sports cars are all about driving pleasure and what better place to start than with BMW? The Z4 is the most expensive option in this list but guarantees endless top-down thrills courtesy of its 2.0-litre four-cylinder turbocharged engine that produces 145kW of power and 320Nm of torque. Push your right foot all the way to the ground and the Z4 will accelerate from 0-100km/h in 6.6-seconds before reaching its top speed of 240km/h.

Nissan dubs their 370Z as ‘the last authentic sports car’ and with its combination of rear wheel drive, a V6 engine and a manual gearbox, it’s hard to argue with them. The engine in question is a 3.7-litre petrol V6 that produces 245kW of power and 363Nm of torque, which almost guarantees some quick acceleration in the Japanese sports car.

The Toyota 86 has become pretty pricey since the first generation but it has also matured into a thoroughbred sports car. The two-door Toyota features a 2.0-litre boxer petrol engine that enables it to accelerate from 0-100km/h in just 7.6-seconds. This is mostly due to the 147kW of power and 205Nm of torque at its disposal.

Undoubtedly one of the most iconic sports cars in the world, the Miata scores first place on this list. Since the first generation, the MX-5 has always been about providing a full-on driving experience at an affordable price and the latest generation is no exception. It’s powered by a 2.0-litre in-line 4-cylinder petrol engine that produces 118kW of power and 200Nm of torque, sent to the rear wheels through a 6 speed automatic transmission.