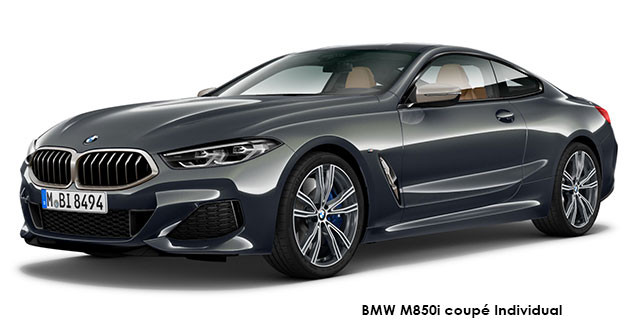 The last few months have been exciting for BMW, with enthusiasts and fanatics sharing hundreds of spyshots, leaks and rumours about the new 8-Series. All of this excitement has partially culminated in the local release of the new BMW M850i xDrive coupe, and I was lucky enough to be invited to drive it through the mountain passes of Cape Town.

The first impression of the new BMW M850i Coupe is powerful. It is long, wide and low and has a terrifying presence. It’s incredible to actually ‘meet’ the M850i in real life. I felt like pulling out a camp chair so I could sit down and take it all in. The design is unmistakeably BMW, with the kidney grilles nestled between two sleek laser headlights. The carbon fibre roof hints at the performance capabilities of the coupe, and the lines around the car give it a muscular appeal. The only thing that disappointed me was the design of the exhausts, which are two large tailpipes that hide smaller exhausts inside them.

The interior manages to strike a perfect balance between sporty and sophisticated. The optional glass package provides the centrepiece for the cabin in the form of a glass gear selector, accompanied by a glass iDrive controller and start button. The buttons on the central dash are all finished in high quality metals, and the large central touch display with BMW’s latest iDrive system provides the driver with a host of different modes, settings and configuration options. The rest of the cabin is surrounded by leather, and the seats take the luxury a step further with intricate stitching. The interior of the M850i coupe is actually on par with that of BMW’s flagship 7-Series with the exception of the rear seats, which are rather impractical in this car. My highlight from the interior is the Harman Kardon 11-speaker sound system.

The performance of the BMW M850i coupe is what puts it at an advantage over its closest rival, the Mercedes-AMG S63 Coupe. While the S63 Coupe is about comfort, the M850i is about refined performance. It’s powered by a twin-turbocharged 4.4-litre V8 that produces 390kW of power and 750Nm, with maximum torque available from as early as 1800rpm. Power is fed through a snappy 8-speed automatic gearbox to all-four wheels through the rear-biased xDrive system. Enable launch control and it’ll do 0-100km/h in 3.7-seconds before powering its way to its top speed of 250km/h.

A quick look at our designated route for the launch made me uneasy about whether the M850i could handle the twisty and narrow bends of Cape Town’s mountains. To my surprise, the 8 handled them exceptionally well thanks to the new Active Steering feature that enables rear wheel steering. This allows the M850i to feel a lot smaller when manoeuvring parking lots at low speeds and a lot more dynamic when cornering at higher speeds.

In the event that you don’t feel compelled to actually drive the BMW M850i Coupe, there is a host of settings and modes that allow it to turn into a semi-autonomous vehicle. I tested this on Cape Town’s busy highways and was impressed. The lane keep system is on point most of the time, but the adaptive cruise control remains my favourite tech-feature on the newer BMW’s. It works like regular cruise control, except it adapts the speed as you drive so that if, for example, the car in front of you slows down or comes to a stop, the M850i will also slow down or stop. This is the undoubtedly the best feature to have during peak Cape Town traffic.

The BMW M850i Coupe has got to be one of the best all-rounders on the market today, and at a starting price of R 1,887,827 you certainly do get a lot of car for your money. The BMW M850i coupe is available alongside an M850i convertible model, and will be joined by an M850i Gran Coupe four-door model later this year.

Buy a new or used BMW 8 Series at a great price.
We put you back in control, make a single request and get up to 3 quotes from dealers nationally.
Coming soon