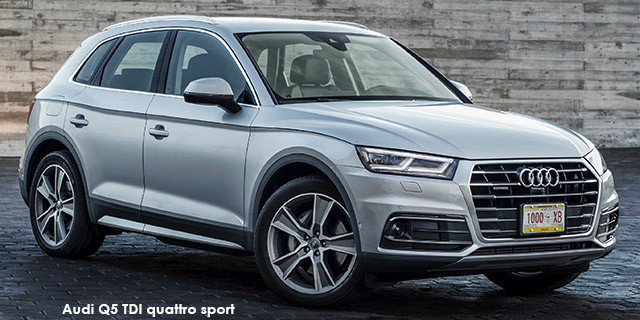 The Audi Q5 is one of Audi’s most successful SUV’s, not just here in South Africa but across the globe. The immense success could be attributed to its striking design, fuel efficiency or luxurious comfort but after spending a few days in it, we realise that it’s the perfect combination of these factors that make it so great.

The engine for starters is one of the Q5’s highlights. Locally there are two engines available, a petrol and a diesel. The unit that we tested was the Audi Q5 40 TDI, which is powered by a 2.0-litre turbocharged diesel engine that produces 140kW of power and 400Nm of torque. This is sent through an S-Tronic automatic gearbox before being distributed across all four wheels with permanent quattro all-wheel drive. Acceleration from 0-100km/h happens in 8.1-seconds before the Q5’s top speed of 218km/h is reached. These figures are impressive but pale in comparison to the efficiency of the 2.0-litre diesel engine. Cruise control and a bit of rational driving can drop the consumption all the way to around 6-litres/100km which, for a car of this size, is mighty impressive.

The design of the Q5 is striking and elegant. It’s got a set of LED head and taillights which reveal the cars unique identity at night. The rest of the design is typical Audi, with a big grille upfront to store all of the radars and cameras and a big tailgate at the back. Audi South Africa’s new ‘black pack’ adds some element of sportiness to the Q5 in the form of a blacked-out grille and a couple of other blacked-out design pieces around the car. The large alloy wheels complete the look, with a wide selection of wheel designs available for customers to choose from.

The interior is where it’s really at for the Audi Q5. The word ‘executive’ comes to mind rather often when thinking of the different materials and designs that are found inside the cabin. The seats, for example, are covered in fine leather and feature electronic switches on the side to find the perfect setting. There is also heated seating for the cold winter mornings. The steering wheel is also finished in perforated leather, providing media controls and buttons straight to the drivers fingertips. The steering also features Audi’s signature flat-bottom which adds even more sporty character to the cabin.

Interior technology is in abundance on the Audi Q5. The Audi MMI is controlled by a handful of buttons and a central dial while the Audi Virtual Cockpit brings new life into the instrument cluster, allowing the driver to toggle between media, navigation and vehicle information in addition to the usual speed and revs. The Bang and Olufsen high-performance sound system makes sure that your music is delivered at its utmost best and the panoramic sunroof lets in all the light and air you need to make those cross country road trips as comfortable as possible.

Buy a new or used Audi Q5 at a great price.
We put you back in control, make a single request and get up to 3 quotes from dealers nationally.
Get Quotes