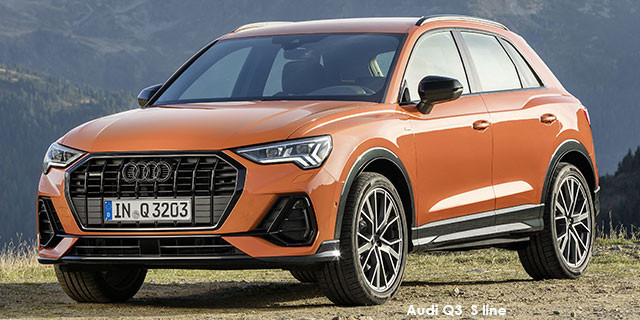 Audi is on one of their biggest product offenses of all time. It kicked off with the launch of the new Audi RS4 Avant and RS5 Sportback, as well as the new Audi Q8, but the German manufacturer is shifting their focus from the high-end models to their top-sellers now. The first top-seller to be released into the market is the compact Audi Q3 SUV. We headed down to George in the Western Cape to drive one of the first models to arrive in the country.

The new Audi Q3 borrows a great deal of styling inspiration from its bigger brother, the Audi Q8. If you look at the new Q3 next to its predecessor, you notice how much more ‘grown up’ it is. The shoulder line is more pronounced, extending from the headlights all the way to the taillights. Speaking of lights, Audi has designed the headlights and taillights to mirror each other, giving the side design a much needed element of symmetry. LED lights with dynamic indicators are fitted as standard across the range, while customers can equip their Q3’s with optional Matrix LED lights for an increased field of view and additional safety. The new single-frame octagonal grille is flanked by large air inlets on either side giving the front of the Audi Q3 a wider, more aggressive look. At the rear, the taillights are slimmer emphasizing the width of the SUV and a new boot spoiler gives the car a more dynamic pose.

Audi has been working hard to reduce the complexity of buying a car so the Audi Q3 is available in three trim levels, namely the Standard, Advanced and S-Line models. They have also reduced the total amount of options available on the Audi Q3 from 80 options to around 30 options. The Standard model is equipped with contrasting wheel arches to maintain the Q3’s off-road appeal, whereas the Advanced and S-Line models feature painted wheel arches for a sportier look. Customers will also be able to choose from 11 exterior colours for the compact SUV, with Turbo Blue and Pulse Orange being the more exciting choices.

The interior of the new Audi Q3 looks and feels a lot more premium thanks to the array of features borrowed straight from higher class cars. The cockpit looks and feels a lot more premium, especially now that a digital cockpit is now standard. Customers can also choose to upgrade the digital dash to the popular 10.25-inch Audi Virtual Cockpit that can toggle between the instrument cluster, navigation, media control and vehicle information. A new feature on the Audi Q3’s virtual cockpit is the ability to select one of three different ‘themes’ for the virtual cockpit, from classic, sport and dynamic modes, which use a different visual design on the digital dash. Audi has also added their Smartphone Interface as standard across the range, allowing buyers to access Apple CarPlay and Android Auto at no extra cost. Customers can also choose a bigger 12.3-inch instrument cluster screen available with the Virtual Cockpit Plus.

At the centre of the dashboard is the new 8.8-inch Audi MMI touch screen display that allows the driver to interact with various settings, media, navigation and other features, such as the 30-colour ambient interior lighting and the on-board assistant that makes use of natural language voice control. As you could probably tell, connectivity is a really big deal in the Audi Q3. That’s why Audi has included wireless charging, a USB port and a USB-C port in the cabin. In addition to reducing the complexity of the options list, Audi also groups a few of their individual options into packages. For example, the Technology Pack equips the Audi Q3 with the Virtual Cockpit, Electrically adjustable seats and so on. There is also a lot of standard kit available on the SUV. Occupants are treated to the Audi Sound System as standard kit, while a more powerful Bang and Olufsen sound system is available on the options list.

At launch there is only one engine available in the Audi Q3, which is the 1.4-litre turbocharged petrol engine that powers the 35TFSI model. The unit produces 110kW of power and 250Nm of torque and sends it all to the front wheels through a 6-speed S-tronic automatic transmission. It was interesting to discover that launch control is indeed available on the Q3, launching it from 0-100km/h in 8.9-seconds before reaching its top speed of 204km/h. This may not look like a lot on paper, but the Q3 really surprised me. At no point do you ever really feel that power is lacking, although the engine does get a bit whiny past the 140km/h mark. Audi claims that the Q3 will do 5.0-litres/100km but no matter how hard I tried, I always ended up at between 8.0-8.5-litres/100km.

There are also quite a few driver aids to make the Audi Q3 a bit easier and safer to drive. Features like lane departure warning, park assist, rear view camera and 360-degree camera are all available on the compact SUV, however I did find the exclusion of adaptive cruise control to be rather counter intuitive for the Audi Q3, especially considering that it will most likely be geared toward long distance road trips and cruising. Aside from that, I think the Audi Q3 is very well equipped and is an even more capable vehicle, both on and off-road.

During our time with it on national roads, the Audi Q3 proved to be a pleasant car to live with. It accelerates quick enough to overtake and the handling was even better. The Audi Q3 was also good at tackling dirt roads, mostly thanks to the sensible tyres that come equipped on it. You can really feel that Audi is investing time and effort into reducing the understeer of their cars and the Q3 is a prime example of this.

Buy a new or used Audi Q3 at a great price.
We put you back in control, make a single request and get up to 3 quotes from dealers nationally.
Get Quotes