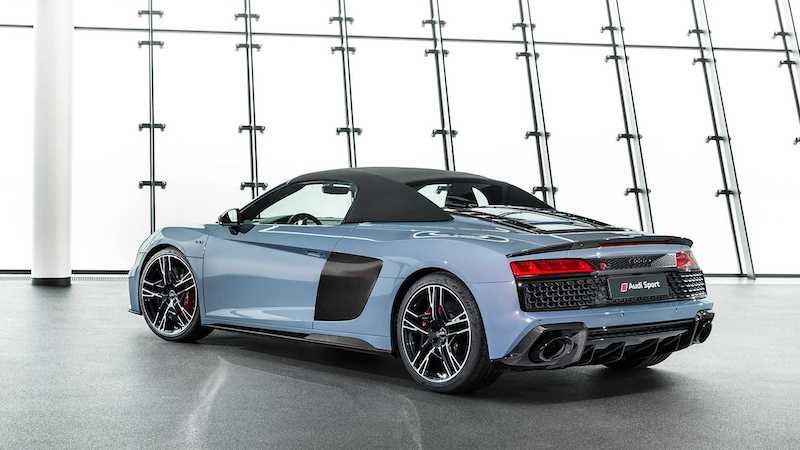 Audi Sport has now officially unveiled their refreshed Audi R8. That said, we knew roughly what Audi's mid-engined supercar would look like, thanks to the R8 LMS GT3 customer race car that was unveiled at the Paris Motor Show earlier this month.

“The R8 occupies a unique position for Audi in every respect,” says Michael-Julius Renz, Managing Director of Audi Sport GmbH. “It’s now even more powerful and faster.” adds Oliver Hoffmann, Technical Managing Director of Audi Sport GmbH: “Motorsport is part of our DNA. With around 50 percent shared parts with the R8 LMS GT3, no other automobile is so close to motor racing as the R8.”

As you can see, it appears far sleeker than its predecessor. Up front, its single frame grill has an even wider, flatter line; thick bars now divide up the larger air inlets, and vents above the grill – as seen on the new A1 - are reminiscent of the iconic Audi Ur-Quattro. There's a new front splitter that is now even wider than before, further underscoring the mid-engined supercars' sporty look. Out back, the air vent grill runs across the full width of the car; while the diffuser has been drawn upward, making the R8 seem even wider.

The new look also includes the Audi R8 interior with its driver focus. New options here include the colors pastel silver with rock gray contrasting stitching, palomino brown with steel gray stitching, and black with utopia blue stitching. The R8 performance design package with leather/Alcantara upholstery, highlights in Mercato blue and carbon-fibre trim is available for the top-of-the-line engine variants. The Audi exclusive range gives customers the opportunity to customize many details of their Audi R8 – inside and out.

There was a fear that the R8 would suffer from downsizing, with its V10 making way for a smaller boosted V6; but we are happy to report that it retains its screaming naturally-aspirated 5.2-litre V10, and gains more power. In the standard R8, power is up 22kw to 419kw, while torque jumps 10nm to 550nm. The range-topper gets a new name. Previously known as the R8 V10 Plus, the flagship R8 is now known as the R8 V10 Performance Quattro, and boasts a power increase of 7kw to 456kw, whilst torque is up 20nm to 580nm. This translates to a 0-100kph sprint of 3.1 seconds, and a top speed of 331kph. In the Spyder variant, this equates to a 0-100kph time of 3.2 seconds and a maximum speed of 329kph.

Modifications to the suspension are said to provide even more stability and precision. The assistance has been retuned both with the optional dynamic steering and the electromechanical power steering. Steering response, transitions between individual drive modes and feedback from the road come across as even more precise across the entire speed range. Revisions to the stability control programming also let the R8 Performance Quattro brake to a stop from 100kph in 1.5m less distance and 5m shorter from 200kph.

The new R8 is expected to go on sale in Europe in early 2019, with Audi South Africa launching it locally towards the middle of 2019.