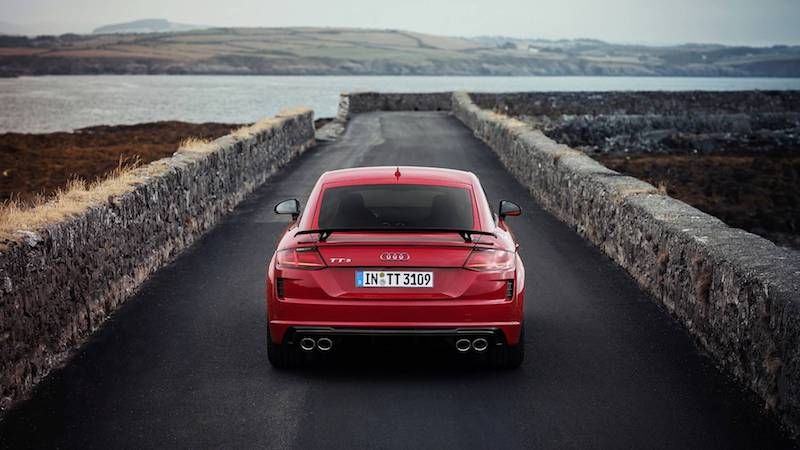 Audi has officially revealed its updated TT – 20 years after the launch of the original Audi TT. And with over 600,000 units sold in the last 20 years, it certainly is an important model in Audi’s line-up.

The new model is expected to have its global debut at the Paris Motor Show in October. For the new model year, Audi has sharpened up the radical-looking TT by endowing it with some refreshing yet subtle styling upgrades, more powerful engine options, as well as extended standard equipment.

Standard features now include Audi drive select dynamic handling, heated mirrors, light and rain sensors, illuminated USB ports, a multi-function steering wheel, and the brilliant Audi virtual cockpit. The standard 12.3-inch Audi virtual cockpit comes with a new sport display as an option, which provides real-time information about the engine output, torque, and g-forces. Audi has also made its drive select technology standard on the TT. It gives the driver several driving modes including comfort, individual, auto, and dynamic to choose from using a switch located on the center console.

Interestingly, the 2.0-litre turbocharged EA888 TTS is said to lose power – down to 224kw from 228kw - due to the fact that it's been made to comply with the latest emissions regulations. Torque though – courtesy of an overboost function – jumps from 380nm to 400nm, meaning 0-100kph will come up in around 4.5 seconds – 0.1 second faster than before. However, much like the Volkswagen Golf R, a reduction in power on international models will not affect South African models, as the local TTS’ output will still be 228kw.

Audi will also offer two petrol whose performance has been enhanced. With 145kw and 320nm in the 40 TFSI as a new basic engine and 180kw and 370nm in the 45 TFSI, both engines afford even more power than their predecessors. A standard 6-speed manual or an optional 7-speed dual-clutch transmissions are on offer.

All TT models have had their exterior refined, but the TTS’ is the most noticeable. The TTS boasts a new single-frame grille with an attractive mesh pattern and reshaped side intakes – once again drawing inspiration from the TT RS. Around the back, they've tweaked the diffuser that house quad pipes, whilst the rear bumper features ventings similar to those seen on the Volkswagen Scirocco. The TT also gets new 17-inch wheels as standard, while the Audi TTS gets new 18-inchers. Audi Sport will now offer optional sizes compromising of 19- and 20-inch wheels.

A new addition to the TT line-up is the TT S line competition, which takes the already sport S line exterior to a whole new level by being more TT RS-inspired. Inside, there’s an additional sport screen in the Audi virtual cockpit and contrasting coloured stitching. The TT is underpinned as before by four-link rear suspension, and the S Line version rides 10mm lower for more hunkered-down handling.

Another limited edition model that will be launched is the TT 20 Years – built to commemorate 20 years of the Audi TT, and a homage to the original concept car that bowed at the 1995 Tokyo Auto Show. The car – which can be finished in either Arrow Gray or Nano Gray - comes with brown Nappa leather seats and black 'Baseball leather' upholstery throughout the cabin, harking back to the original car. Matte finish Audi badging, five-spoke 19-inch wheels, black brakes, polished tailpipes, and Matrix OLED rear lights complete the 1 of 999 car.

Expect the range-topping Audi TT RS to bow shortly too – now sporting a front reminiscent of the Audi RS 5 Coupe. The new Audi TT is expected in South Africa in the first quarter of next year.