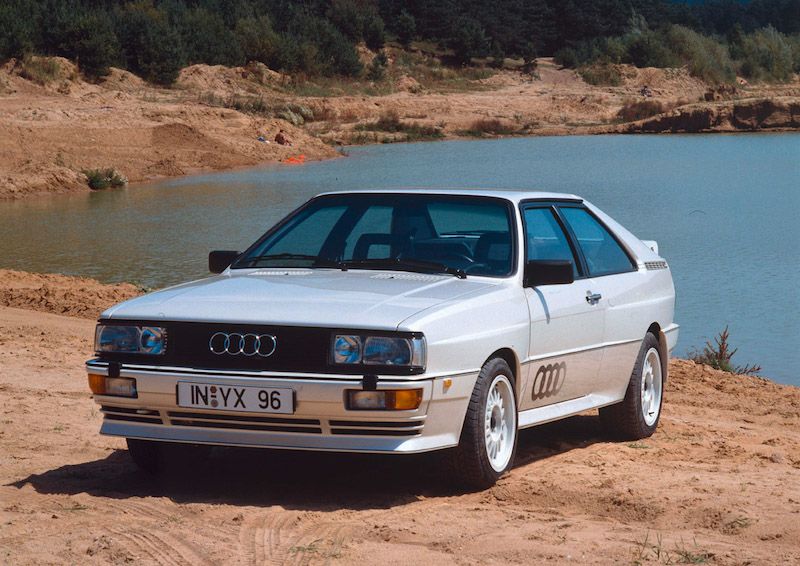 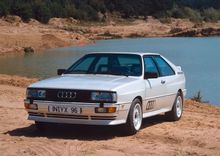 Sometimes referred to as the Ur-quattro – Ur meaning “original” in German – this is the car that redefined Audi, a trailblazer that gave the company a glamorous edge, an enviable international competition record, and the right to challenge traditional supercar manufacturers.

And because of that, it’s totally fair to honour the Audi quattro GT Coupe, by referring to it as one of the most legendary Audi's ever made. These days, Audi affixes the term 'Quattro' next to their model names, but this car was THE Quattro. The very first quattro car, and the first to be mated to a turbo motor, the quattro was never originally designed to go into production, with the road car simply there to homologate the Group 4 racer. It was loosely based on the Audi 80 from which the prototype was developed.

The longitudinal driveline made it relatively easy to extend a propshaft to the rear, while the rear suspension was essentially the front suspension and subframe turned through 180 degrees. Power came from Audi’s transversely mounted, turbocharged 2144cc SOHC inline-five with two valves per cylinder, rated at 147kw and 285nm, and to put it mildly, performance was explosive. A centre differential allowed drive to be apportioned between the two axles, preventing wind-up, and splitting power 50:50 between the front and rear.

Because of its quattro all-wheel drive system, it rocketed from 0 to 60kph in just 3.7 seconds, with 100kph coming up just 4.6 seconds later. It’s important to remember these were incredible performance figures from a little 2.1-litre motor in 1983. The standing kilometre was despatched in just 29.3 seconds, achieved at a terminal speed of 178.5kph. And thanks to a short-ratio five-speed manual transmission, it registered a top speed of just over 208kph.

Yet it wasn’t the quattro’s performance so much as it’s astounding road-holding, agility and refinement that created an impact. Suddenly, this 1.3-ton Audi quattro was one of the fastest point-to-point cars on earth. It was partially hand-built on a dedicated line at Ingolstadt, every car undergoing extensive static and test-track quality assurance including a 160kph run. What was equally surprising was the size of its fuel tank – with it able to hold an insane 90 litres.

The car was immediately recognizable by its front and rear spoilers, and flared fenders; while its wheel arches were filled with 15-inch alloy wheels shod with ultra-low profile 205/60 VR15 rubber. Out on the road the disc brakes did a decent job of stopping the car quickly and in a straight line, with the coupe hauled to a standstill from 100kph in just 3.8 seconds.

Oddly, the quattro was not the world’s first high performance, permanent four-wheel drive coupe, but Britain’s 1968 Jensen Interceptor FF was a highly specialised, very low volume model. It was the quattro that pull all-wheel drive on the map as a real-world option.

The quattro won at rallying straight out the box in 1981, racking up 8 wins in its first full season in 1982. World championships then followed in '83 and '84. The race cars got more powerful and more outrageous looking, culminating in the Group B Quattro S1. Incidentally, that car produced around 340kw and rocketed from standstill to 100kph in just 4.4secs.

In addition to dominating Group B rallying (Sarel Van Der Merwe won local titles in '84 and '85), the Sport Quattro won the 1985 Pikes Peak International Hill Climb with Michèle Mouton in the driving seat, setting a record time in the process.

Back in the early 80s, the quattro gave us our first hint at what the modern performance cars would become. Fast forward 35 years, and just about every performance car features a high-tech all-wheel drive system and a turbocharged motor. There were only a handful of examples imported into South Africa, and back in 1982 came with an asking price of R45 000!