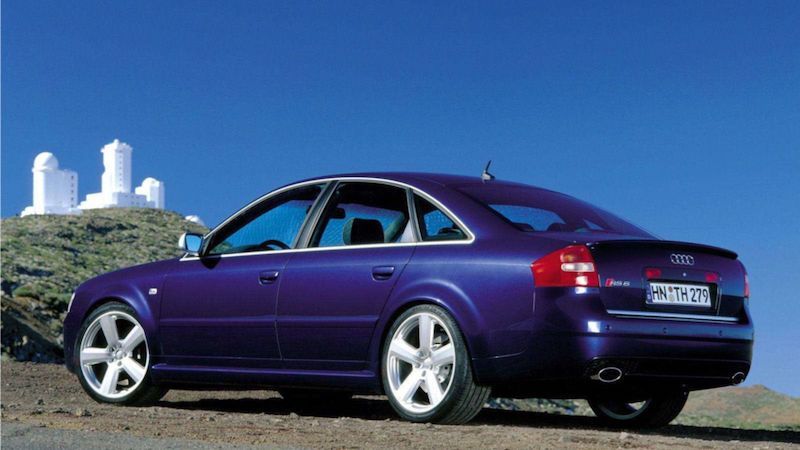 The Audi RS6 was launched at a difficult time. The executive saloon market was being dominated by the BMW E39 M5, and then taken to a new level by the Mercedes-Benz E55 AMG.

But while the RS6 might not have been the immediate choice for the performance inclined, it did carve out a name for itself with its supercar-like performance, and immense composure. The RS6 was actually the quickest-ever Audi built by then subsidiary Quattro GmbH, the people behind the RS4 and the RS2.

The early 2000s was a time of understatement and subtlety – and the RS6 was a masterclass in that. There were no overt add-ons, although it would have been near impossible to mistake it for a regular run-of-the-mill A6. The most obvious change was up front, where a deeper, integrated front bumper boasted a trio of honeycomb mesh intakes, while extended side skirts and a revised rear diffuser underscored the RS6’s muscular appearance.

Under the RS6’s swooping bonnet was a thing of real beauty. Developed by Quattro GmbH with help from Cosworth, the RS6 was powered by an all-aluminium, quad-cam, 4.2-litre 40V V8. More importantly, it was equipped with twin turbochargers, each with an air-to-air intercooler. Audi claimed it produced 331kw and 560nm – which was available from 1,950rpm all the way to 5,600rpm. It was linked to a 5-speed Tiptronic automatic gearbox with a DSP adaptive shift program.

Drive was to all four-wheels via a Quattro system, complete with a Torsen differential. When tested at altitude, it ran from 0-100kph in 6.15 seconds. But when tested at the coast, it accomplished the same feat in just 5.15 seconds, whilst powering hard to its electronically-limited 267kph top speed.

It may have not been as quick in a straight line as the mighty E55 AMG at the time, but the RS6 was a far better balanced car. It might have not had the sheer aggression and firepower that the AMG had, but the RS6 was able to harness its available reserves with greater assurance – as a result, from A to B, the RS6 would have been the quicker, smoother, and more enjoyable car.

The Audi suspension setup, comprising a setup of independent front and rear suspension, did without electronic aids. It however come with an innovative non-electronic system called Dynamic Ride Control or DRC. This system counteracted roll and pitch by seamlessly varying the pressure between diagonally opposed dampers – further improving ride refinement under normal driving conditions.

Slowing the RS6 was a set of eight-pot calipers up front and single-pot at the rear, with floating, perforated and ventilated discs. The interior of the RS6 was a typical Audi affair – apart from the Recaro seats, and brushed aluminium trim.

The C5 RS6 was available for a very short time in SA, shortly before the C6 A6 arrived in late 2004. Interesting, Audi South Africa released both the RS6 sedan and RS6 Avant in SA in late 2003, with them priced at R785 000 and R803 000 respectively. Of the 8000 odd C5 RS6’s manufactured, apparently only 52 made it to South Africa, making this very much a collectible – not just for Audi Sport fans, but a performance bargain for petrol heads alike.