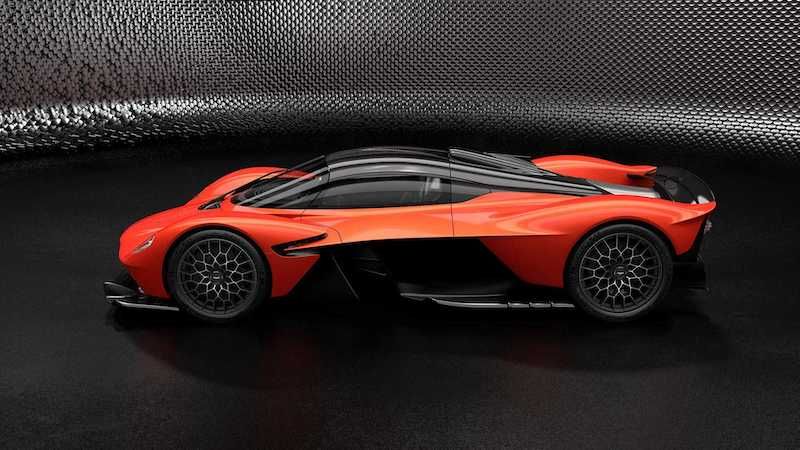 The Aston Martin Valkyrie leads the pack as one of the new generation of hypercars, and now the British automaker has finally lifted the lid on its final powertrain specifications.

The heart of the Aston Martin Valkyrie’s powertrain is its clean sheet Cosworth-built 65° naturally aspirated 6.5-litre V12 engine. Evoking the spine-tingling, ultra-high-revving F1 engines of the 1990s, but benefitting from two decades of progress in design, material and manufacturing expertise, it sets exceptional new standards for maximum rpm and weight.

With a certified peak power output of 746kw (1,000bhp or 153.8 bhp-per-litre) at 10,500rpm, it can continue on to a maximum 11,100rpm. This is a world first for a naturally-aspirated, emissions-compliant road car. Peak torque is 740nm at 7,000rpm. These peak outputs are purely delivered by the ICE (Internal Combustion Engine), with a further performance boost delivered by the battery hybrid system.

When describing the powertrain of a traditional road car, or even a conventional hybrid road car, it is easy to separate the main components and describe their individual roles. In the Aston Martin Valkyrie, where the design and engineering of each and every part has been approached with the meticulous ethos of Red Bull Advanced Technologies, out of their Formula One DNA for maximum efficiency and ultimate performance, many key components do more than one job.

Using the Aston Martin Valkyrie’s powertrain as an example, both the V12 engine and gearbox casing act as stressed members of the vehicle structure. The latter provides rear suspension mounting points, while also helping provide even greater structural rigidity and eliminating the weight of an additional rear subframe.

The battery pack integrates all relevant sub-systems and serves as the carrier for the vehicle’s power electronics, while in addition to its Power Boost and Energy Recovery System functions, the E-Motor aids the mechanical performance of the gearbox. Aston Martin Valkyrie exemplifies intelligent engineering wherever you look.

A KERS-style boost system akin to those fitted to F1 cars, the Aston Martin Valkyrie’s hybrid system has been developed by two main technical partners; Integral Powertrain Ltd, who supplied the bespoke electric motor, and Rimac for the lightweight hybrid battery system.

Vice President & Special Vehicle Operations Officer, David King said, “Aston Martin Valkyrie is set to be the ultimate hypercar in the automotive world and these performance figures underline that statement. Red Bull Advanced Technologies, Cosworth, Rimac and Integral Powertrain Ltd. have been fantastic partners in the development of this powertrain, ensuring that we have already created a hybrid system that is emissions-compliant and ready to begin fitting to our first physical prototypes. I am, as I’m sure the rest of the world is, incredibly excited to see and hear the first of these cars on track”.

The Valkyrie will go up against the upcoming F1-engined Mercedes-AMG ONE, and will be priced from US$3.2 million (ZAR 45 million). The hypercar will be built in a production run of just 175 units (150 road cars, along with 25 race-only versions dubbed the Aston Martin Valkyrie AMR Pro), with the first deliveries expected to commence before the end of 2019. Interestingly, there are three that are apparently on the way to South Africa.